Japan- the land of enigma. Where baseball pips Sumo as the national sport. Where there are more practicing rugby players than in New Zealand. Where people who follow Sumo and come from the land of head-chopping Samurai warriors genuinely view rugby as a scary sport.

Is rugby really scary? Guess so if you’ve no idea of the rules and have to work out why players are smashing into each other with abandon. You see that’s just it- rugby in Japan has long remained cosseted away from the general public. That’s about to change.

Rugby for the Japanese began in Japan at the prestigious Tokyo-based Keio University in 1891. A team of students played the first official game of rugby in 1891 against an all-British team based out of the Yokohama Athletic Club. Since then the rugby spread nationwide through universities & their alumni.

By the 20th century rugby was being played at most schools attended by the nobility & the upper-class. The author Yukio Mishima’s first published short story features a sensitive individual who becomes the victim of a brutal & bullying rugby club- scary stuff!

In the lead up to the Second World War foreign games were frowned upon and rugby was (scarily?) re-branded into “Tokyu” or “fighting ball”.  In parallel with Japan rugby recovered after the war with Kobe Steel using the sport to raise morale among its workforce. Thereby setting in motion the relationship that defines Japanese rugby to this day- corporate involvement.

While still lagging behind baseball, football, basketball & volleyball Japan does have a professional league- the Top League. Many of the teams are company owned and players well-paid.  In addition the game remains popular at University & High School level.

The Cherry Blossoms- arguably the least scarily moniker for a national rugby team have had some memorable moments. In 1989 they defeated an albeit under-strength Scotland. That was nothing in comparison to what happened on September 19th 2015 when for once rugby wasn’t scary & the Cherry Blossoms, led by Eddie Jones, became national heroes. Defeating two-time world champions South Africa caused a temporary blast of courage among Japanese viewers of whom almost 25 million people tuned in to watch their warriors…ehmm…cherry blossomers play their next match!

Today Japan are ranked at 11th in the world. They host the Rugby World Cup in late 2019 that will see 20 competing teams play 48 matches in 12 locations. The games are scheduled to coincide with the weather- it won’t be too hot or too cold.  It will be perfect- except for one thing. The Rugby World Cup coincides with a traditional festival of ghouls held on the 31st of October so no matter what happen it’s going to be scary at some point! 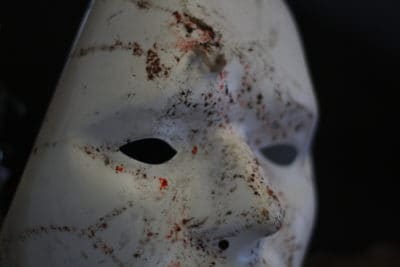 Get your tickets, buy your sim. Wear your toughest looking national rugby shirt, dab on the face paint and make some new friends. Japan’s not that scary after all!