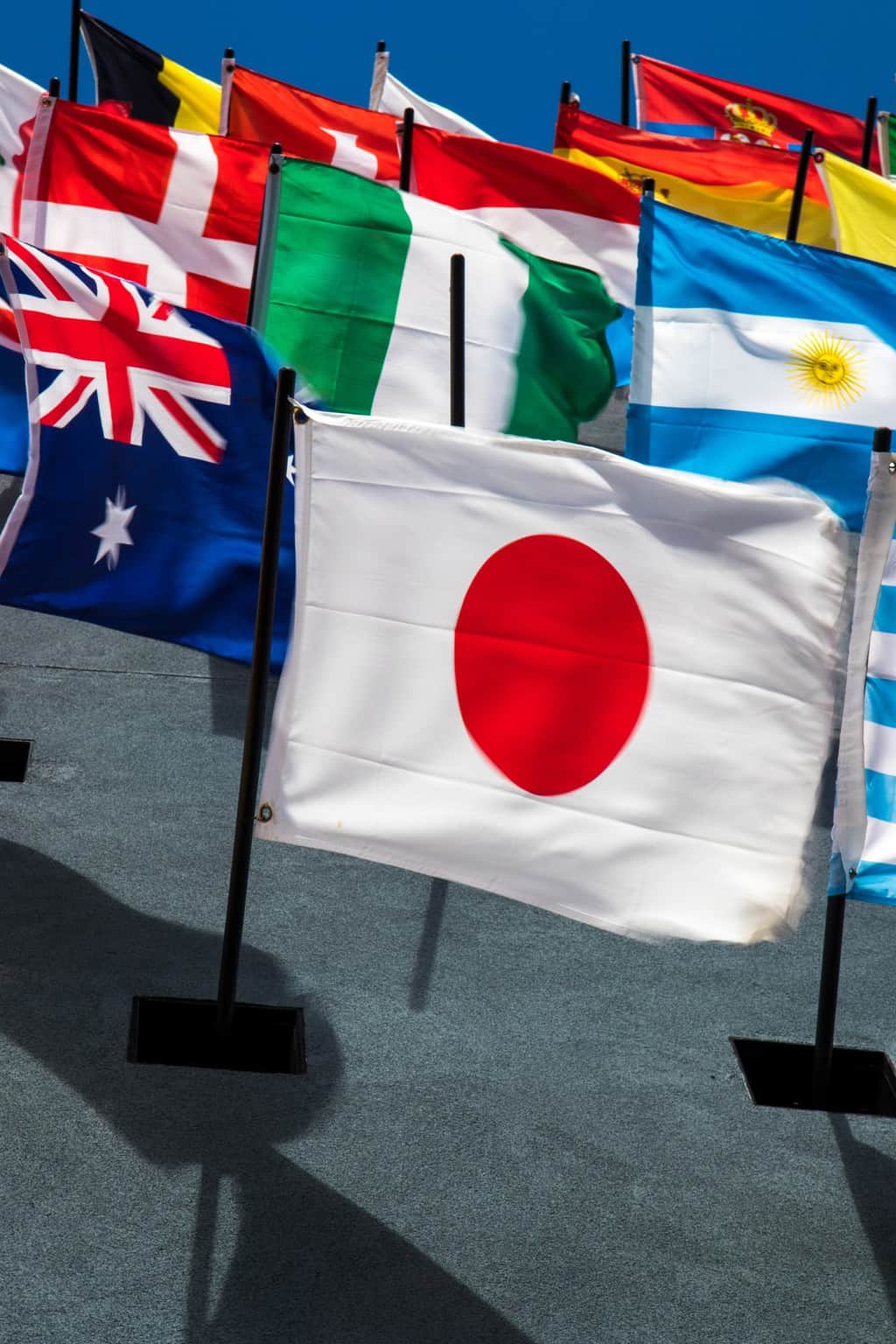 For rugby fans worldwide the Rugby World Cup 2019 pre-tournament excitement is building. There’s a veritable online scrum for tickets & hotel information as fans get to grip with the enormity of what they’ve signed up for. In Japan too the excitement is building- albeit at a simmering pace.

Fans of rugby represent a minority despite Japan having a sizeable playing base of over 125,000 rugby players. Traditional sports (sumo, martial arts) vie for the public’s attention alongside imports such as baseball & volleyball. Rugby’s popularity is steady but not stellar.

With less than a year out before Asia’s 1st Rugby World Cup you would be forgiven for thinking it merely served as a starter before the main course- the 2020 Tokyo Olympics. The Japanese media churn out Olympic-themed articles with regularity. Superhero & Anime characters appear on various media abound while ingenious ideas of how to keep athletes alive during the sweltering summer heat of the capital seem to be medal-winners for now. In short the more bonkers & more zany the more appeal. But it’s all about the Olympics.

What about the rugby?

Did I mention that 3 of the 12 venues earmarked for Rugby matches will also be used for the Olympics? To a large degree in some quarters the Rugby World Cup is a rehearsal for the Olympics. X-ray machines to instantly diagnose injured players, the recruitment of a small army of volunteers, even security arrangements are all having a run-out in the Rugby in preparation for the Olympics.

1964. A battered & bruised Japan emerged from the scars of war in 1964- the year of the last Summer Olympics held in Tokyo. Japan won 16 Gold medals, launched its 1st bullet train service and endeared itself to the world in a way that was unthinkable 20 years prior. The Olympics therefore are associated with the good times and the media are playing on the fact that the good times are coming back!

So far the Rugby World Cup has gone largely unnoticed. It’s an unknown quantity. Japan has never hosted a Rugby World Cup before but the idea that a marauding force of 400,000 fans will simply go unnoticed among a populace going about their daily business is unlikely. Add to the mixture the simple fact that while the Tokyo Olympics is being held in Tokyo- the Rugby World Cup is not- it spans Japan. According to Google it would take you 355 hours to walk from the southern venue of Kumamoto on the island of Kyushu to the northern venue of Sapporo on the island of Hokkaido- not to mention you need to swim most of the distance. No single blog post could do justice to the experience that awaits the rugby visitor in 2019.The scale of adventure that awaits the Rugby fan in 2019 is frankly off the charts.

What have you signed up for?

A smorgasbord of rugby and a likely road trip extraordinaire.Travelling in odd vehicles with absurd plot developments might sound like an episode of the Wacky Races!  However for intrepid rugby fans who decide to do Japan their own way (and well they should!) Dastardly & Mutley do spring to mind.

How else for example will a fan of England having enjoyed a night out after playing Tonga on September 22nd get to Kobe for an 11:45am kick-off for the match against the USA on the 26th? If you plan on walking you had better be fast! Google estimate it’s a 263 hour walk but omits the fact that you need to swim part of the way!

The good news is that Japan is nothing if not efficient. Planes, trains, automobiles are going every which way- you just have to figure out which way you need to go! Downloading the Japan Transit app or getting real familiar with Google Maps is a must. Note: Google Maps does not work offline. Another reason why you need a Mobal SIM for Japan.

And by the time you get to Japan in the autumn of 2019  the local population will have twigged that this oddly uniformed mass of people are not an invading force but are the lost tribe of rugby fans on whom little information has been shared.

Don’t be surprised then that by September 2019 to be able to walk into a local bar festooned with your country’s colours replete with Japanese fans donning your country’s uniform wanting to join the fun. It’s a peculiar trait of Japan that it seems disinterested in the world at large until close contact is no longer optional- at which point expect to be overwhelmed by the interest & kindness of the host nation.

The unexpected. Japan does not know what to expect either so it’s a two-way street. A popular British-themed chain of over 100 bars “HUB” have plans to assign clusters of their bars to each visiting nationality and to provide a tailor-made menu- fish & chips to the English, Irish Stew to the Irish, Roast Lamb or a barbecue for the Aussies, etc. That might sound like sacrilege to foodies but try find a sushi bar showing the rugby on a large screen!

The HUB’s plans should work. All bars have large screens & unusually for Japan they serve good beer on a cash on delivery or cash at counter basis.

Accommodation will be sparse in some of the venues. Take Kamaishi- a town that suffered terrible losses in the 2011 earthquake- in which 30% of its buildings were destroyed. In 2019 it will showcase a purpose-built stadium and will host Fiji vs Uruguay on September 25th.  If there is one match to attend as a neutral this is it.

Even the larger venues- such as the Shizuoka stadium- 40 minutes from the town of  Fukuroi will struggle to put a roof over all the expected visitors.  But the townsfolk are already trialling a homestay programme that would effectively open the doors of local houses to rugby fans. Japan may not yet fully get the Rugby World Cup but they are already planning the welcome.

There will be plenty of time for high-speed high jinks on your rugby road trip. But plan to take a moment to take in the surroundings too. The afore-mentioned Shizuoka stadium which will welcome fans from South Africa, Italy, Scotland, Ireland, Australia, Georgia is worth a visit in itself. If you happen to travel from Tokyo by Shinkansen (bullet train) and reserve a seat in Row E have your camera at the ready for some of the best views of Mt. Fuji !

On arrival at the stadium a cool beer will be waiting along with typical stadium food such as  fried noodles & sweet potatoes. And for a truly unique experience book a night at a local home-stay and party with the locals.

Japan awaits. Information for now is sparse. Mobal aim to keep you updated and in the loop but while some things can be done in Japan others cannot. Here’s a brief list of what’s possible & what’s not.

-You can only get your Japan Rail Pass a maximum 90 days in advance of travel. Train seats can and should be reserved in advance but can only be done in person. Visit a JR Rail Office in the first days of your trip for maximum comfort.

– Get cash in advance. Most overseas banks do not carry a lot of Japanese cash so best to either get/reserve before travelling. There are plenty of exchange services on arrival in Japan but you will pay for the privilege- and expect to queue. Japan welcomes 28 million visitors a year and the airport can get quite busy. And yes you will need cash.

-Get your sim card in advance. You will rely on Google Maps and having a phone number to call when lost or to hand your phone to a taxi driver when you need to get somewhere will reduce your stress. Mobal offer free worldwide delivery or free collection in Japan and are on hand to assist when you get here.

-For amazing (cheap!) domestic flights in Japan look up the JAL Explorer Pass. You can get from Sapporo to Tokyo for under 60 dollars and for the same price you can fly from Tokyo to Kyushu’s Fukuoka Airport. With Oita, Kumamoto & Fukuoka  hosting the likes of New Zealand, Wales, Australia, France, Italy & the USA it’s an extraordinary good deal.

– When in Tokyo keep an eye out for the soon to be launched Tokyo Night Time Passport. The Passport is a map of the main eateries & drinkeries in Tokyo’s two most popular entertainment centres- Shibuya & Shinjuku. Value Menu Vouchers to a value of 2,000 yen & 3,000 yen can be redeemed at local restaurants for fixed menus allowing you to work off a fixed budget and dine & booze without fear of a financial meltdown.

As I said before- details are scant but by the time you get here the welcome will be warm.

How To Activate the Japan Unlimited SIM 2018 »