Word of the Week 2: Gachapon

Not a word that rolls off the tongue. Gachapon is the like the inside of a Kinder egg taken from its chocolate womb. Made from two words- “Gacha” and “Pon”. It describes the sound of purchasing a capsule toy from a toy machine.

Gacha is the twist of the machine handle and Pon is the sound of the toy being delivered.

To pronounce Gacha think of doing a Karate chop- Ga-Cha!

To pronounce Pon just think of the sound of a semi-hollow plastic egg dropping.

Gachapon is no Joke

A multi-billion dollar industry the Gachapon is uniquely Japanese. Loved not only by small kids but all kids at heart you can expect to see the Gachapon vending machines in electronic stores or in train stations. There are plenty of people suits taking part in the craze too.

Originally the toys that popped or “Pon-ned” out of these machines were limited to figurines. Of course toy figures still feature- especially anime character replicas but the menu has expanded beyond that. Expect the unexpected.

Twist of the Unexpected

From whence it came

Japan has not always been renowned for quality. Perhaps our readership is too young to remember this joke?

Nissan Car Company: we need to design a cheap car and we need it quick!

Explainer: Datsun was the brand Nissan used for exported cars from 1958 to 1986. They re-launched the brand in 2013 in emerging markets! 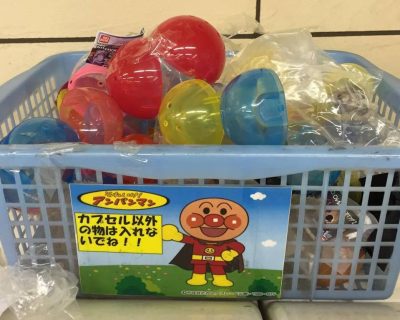 In the 1960’s a man now known as “Old Man Gacha Gacha” (ガチャガチャおじさん) brought an American vending machine to Japan. Old Man Gacha Gacha thought the machine to be a little un-Japanese in that it spat out its contents with little regard. Unclean he thought. Uncouth he thought. Doing what came natural to his Japanese sensibilities he provided a clean, safe plastic shell for each toy and –Gachapon!

Our Deluxe Phone is finally back in stock! »