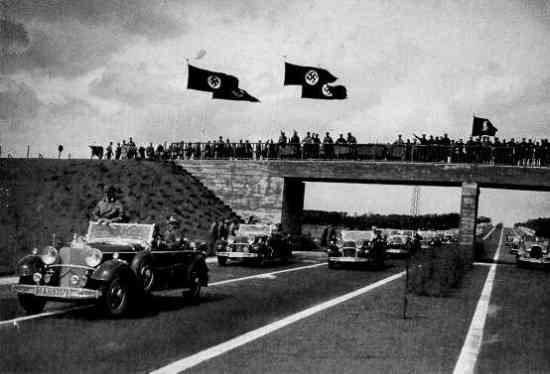 Driving on the Autobahn History of the Autobahn

The first part of the autobahn was built between 1913 and 1921. 19 km of highway was built in Berlin. It was the world’s first major motorway. Then, in the early 1930s, Adolf Hitler began adding more routes to the system to move his large military force and stabilize Germany’s economy. Entire new sections were built in 1935, 1953, and 1958, increasing its total length to 1,411 miles. In 2004, the autobahn was 7,483 miles long.

Depending on the location, the autobahn has two to four lanes. There is a wide green median down the center with guardrails. It’s also equipped with emergency shoulders and acceleration/deceleration lanes. The autobahn has a very sleek design where there are few curves. It’s even paved with freeze-resistant concrete.

It’s true that 57% of the autobahn does not have an actual posted speed limit. This is why many people assume that they can go racing down the “limitless highway” without worrying about breaking the law. In a zone where no limit is posted, a speed of 80 MPH is always recommended for obvious safety reasons. If you were to get into an accident on the autobahn you could be charged with reckless driving even with no limit law in place. The other 43% of the autobahn does have a speed limit and these speed limits change based on where you are. They range from 60 MPH to 80 MPH. If you are caught speeding above these limits, you will be fined severely. There are many radar traps set up to catch people who break the law. Germany’s highway patrol ( Autobahnpolizei) monitors and regulates the autobahn’s heavy traffic. Typically, they travel in unmarked vehicles, following cars closely. This is why they are able to catch so many people making moving violations. The Autobahn is also covered with secret cameras that can snap a shot of you, your car along with your speed at any time day or night. Drivers may never know they were caught speeding until they receive a violation ticket with the photographic proof in the mail.

The autobahn can experience very bad traffic jams or staus as they call them. They are worse on the weekends when people can end up stuck for hours. Fortunately, there are radio stations that broadcast traffic updates regularly and there are even signs posted on the autobahn that give drivers road updates and also tell the frequency of the traffic stations.

On the autobahn, you can find rest areas with places to eat, restrooms, and fuel areas. These rest stops are known as Raststätten and restrooms are known as Toilettes. Some rest stops even have motels where you can rest up after a long day of travel.

In case of an emergency, you should look for one of the white poles alongside the road. Each one has an emergency phone that’s connected to an operator who’s on hand to offer assistance. Speak to them and they will help you. If you can’t speak German, they can put you through to an English-speaking operator. The phones have a yellow button to press for a breakdown and red button to report an accident.

Other Resources for the German Traveler

« Traveling to the Great Wall

What Every Traveler Needs To Know »