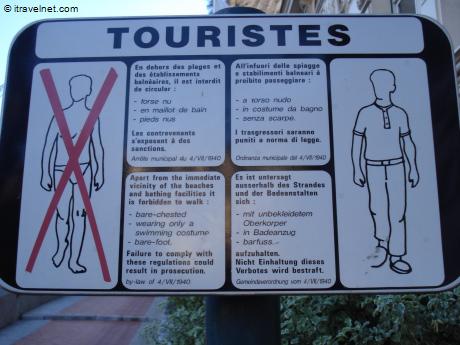 The 8 most annoying things you can do as a tourist

It seems nothing can infuriate us more than dealing with our fellow countrymen overseas. Here are the most annoying things about tourists in all their clichéd glory…

(And I hope you’re guilty of none of them!)

1. Think everything should work like it does back home

Americans who think everyone should do everything the American way. I’ve seen tourists go into a store (NOT a tourist store), ask the price, and then ask “How much is that in dollars?”

Everyone’s supposed to know. Everywhere is just an American colony, so they should all be conversant in both their own “funny money” and in dollars. If we were in America, and I asked them how much a thing is in Polish zlotys or Vietnamese dong – or even in Euros or Pounds, they’d think I was crazy.

Travelers that don’t want to try any of the local cuisine. Often they are disgusted that they can’t find American style food on the menu, or worse, that there isn’t a menu.

What annoys me is when U.S. tourists are so loud.

Arguing in places where others can not leave to avoid listening to them like on planes.

On an organized tour, people who ignore the tour guide and talk so loudly to their friends that others on the tour can’t hear the guide. It’s not only rude it totally obnoxious.

I have to agree – the American tourists are the worst. Talking loudly even though sitting next to each other, and forcing us all to hear all their personal information.

3. Think the rules don’t apply to you When they assume the rules do not apply to them and show no respect for local culture.

Wearing immodest clothing in countries where women cover their legs with skirts. Disparging the country they are in. Yes, tourists from Europe, this applies to you too.

5. Forget the world does not revolve around you

People who are in a tour group and return late while everyone else is waiting on the bus.

On tours, passengers who don’t return to the bus by the time requested.

6. Think English should be default

Hearing “why don’t they speak English” when you’re obviously in a foreign country with its own language. The hideous American tourist ‘costume’ consisting of sneakers, fanny packs, and inappropriate clothing such as shorts and tank tops.

It’s better to try to behave and dress like those whose homelands you are visiting. Look around you and absorb. There is absolutely no need to stand out like Ronald McDonald.

8. Travel as part of a herd Tourist buses/trains/ships. I was in Bar Harbor recently and saw three cruise ships pull in. Within two hours everything was packed with loud, ignorant Americans and throngs of Europeans, too. You take a small town like Bar Harbor, which is already filled with tourists, and dump several hundred more in and it looks Saint Peter’s Square on Easter.

And finally, we know it’s not every tourist who behaves  like this…

Well, as an American I was somewhat dismayed at how American tourists are stereotyped into one dimensional caricatures. Please, when I traveled in Europe I wore conservative clothes and made sure to at least know how to greet and show appreciative in the native tongue of the country I was traveling. Americans are not one people, we are a land of immigrants, and many of us travel to other countries to have a better understanding of our roots and heritage. Believe me there is plenty of obnoxious stereotypes in just about every country to go around.

One thing though, I have met Americans who are this way, but I have also met really nice Americans too and rude Europeans who are rude to you until they find out you’re not American, then the attitude changes.

Hey! I have to stick hp for the Americans! Not all of us are loud and obnoxious and dress for the gym when traveling!

When we travel we dress in the basics. No tennis shoes, no fanny packs (which I found out refers to stomach fat in some countries, but I mean the other kind.) We are polite and speak softly and try to approach people politely in the manner of the country we are in.

The French say that Americans smile too much…I suppose that’s one thing I don’t really care if people notice!

So, not all Americans are obnoxious! (Although I confess it bothers me when I see those who are.)

There are obnoxous people everywhere. Americans don’t claim that prize by themselves. And yes, Everyone likes American Dollars! So stop blaming Americans. You just see more Americans because more Americans can afford to travel.

Agree? Disagree? Have another example to add? Leave your comments below…

« What is your favorite saying in a foreign language?