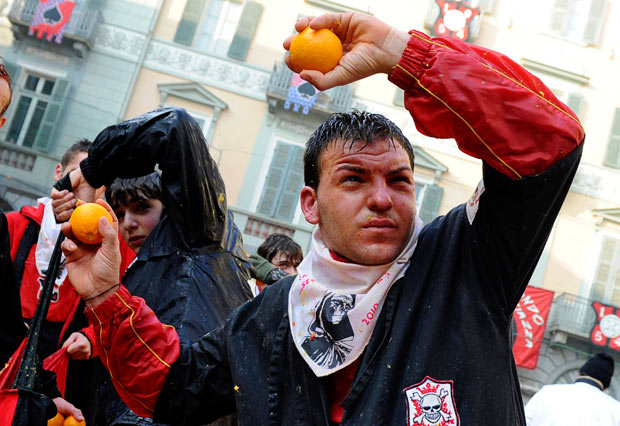 Customs and Traditions From Around the World

Depending on where you are these traditions from around the world may appear a little strange, but to others they are part of their history and heritage,

Here’s a list of the most unusual. You may already know some of them, but all of them are very fascinating and give you an insight in to other peoples cultures and traditions.

If you have any, or know of any other customs and traditions that aren’t mentioned in this list please feel free to add them within the comments section. The core celebration of carnival is based on a locally famous Battle of the Oranges.

In Greece, a child’s tooth is thrown onto the roof for good luck.

In Indonesia, a person points with their thumb as it’s considered very rude to point with a forefinger. Hold your Stomach, the Thunder is Coming.

Japanese children cover their tummy button when they hear thunder.

Foot Binding, a beauty ritual for women to keep their feet from growing too large, is a painful Chinese tradition that only stopped in the 1930s.

The Fulani Sharo Tradition. A coming of age ceremony celebrated in some parts of Africa

In Brazil, New Year’s Day is celebrated with a bowl of lentil soup as the lentil is considered a symbol of wealth

It’s considered very rude to pointing the bottom of one’s foot at another person, as is touching the top of another person’s head. The Bahai People of Iran have their own calendar consisting of nineteen months each with nineteen days.

In many Western cultures, children leave teeth under their pillow for the tooth fairy to collect – usually in return for some money!

A Norwegian bride traditionally wears a silver crown with dangling charms to ward off evil spirits.

Wedding celebrations can involve five parties in some parts of the Middle East, beginning with the engagement party and ending with the wedding shower, seven days after the marriage.

Shoes must always be removed before entering a Japanese home. This also holds true for Indian households too. In Russia, Father Frost brings presents for the children on New Year’s Day.

Gold and silver coins are placed inside a brides wedding shoes in Sweden.

At a Caribbean wedding ceremony, the groom never has a best-man.

Zwarte Piet. In the Netherlands, Santa has a helper named Zwarte Piet or Black Pete. Often said by people in the UK to counteract the bad luck brought by the sighting of a single magpie.

Wherever you visit around the world, make sure you take a Mobal World Phone with you. Spread the news, talk to family, friends and business colleagues and share your experiences.

« Places to Visit in Japan on Vacation

Where Do People Use Their Cell Phones? »

17 thoughts on “Customs and Traditions From Around the World”