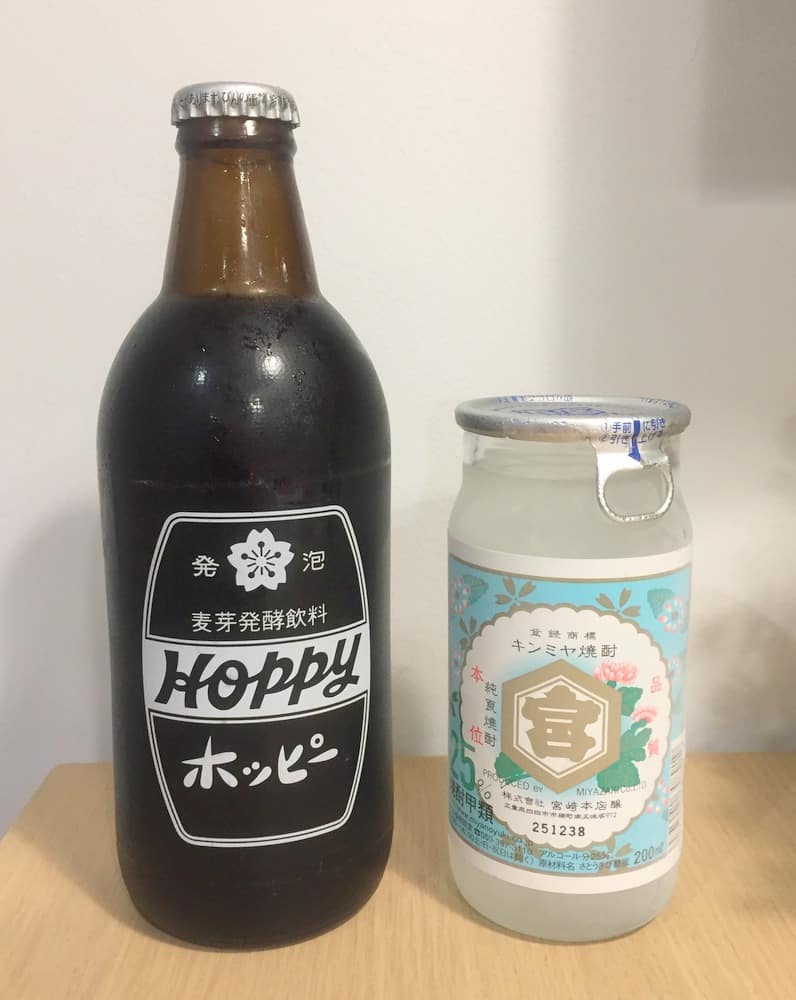 Japan’s long history remains evident in its most basic structures, influencing society down to the way people drink. One of the little known gems of the past is a drink known as “Hoppy.”

So What is Hoppy?

Hoppy is a low-alcohol, beer-flavored drink, born in downtown Tokyo in the post war era. During this time, beer was highly taxed, and an alternative to this now luxury beverage was born out of necessity. Legally, at 0.8% ABV, Hoppy is not considered an alcoholic beverage, thus being tax exempt, and was created with the intention of being mixed with shochu. 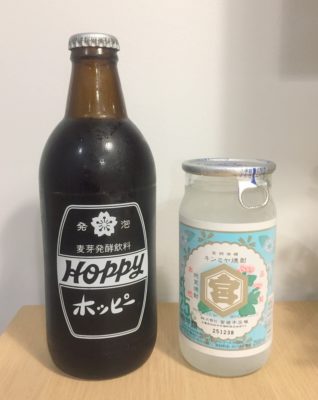 Shochu is a type of distilled liquor which can be made from a variety of ingredients including sweet potato, rice, and barley, which usually has an ABV of about 25-30%. In addition, Japanese shochu can be divided into two x categories- “korui” (甲類) and “otsurui” (乙類).

Otsurui is distilled only once leaving a strong flavour & aroma and ideal for drinking on its own. Korui however is distilled multiple times and by so doing reducing the strong taste- and making it ideal for cocktails.

What Shochu is mixed with Hoppy?

Kinmiya shochu from Japan’s Mie Prefecture boasts the best source of water in all of Japan drawing all its needs from the nearby Suzuka river. A “korui” shochu it has become the staple accessory to Hoppy in many of Tokyo’s drinking dens. 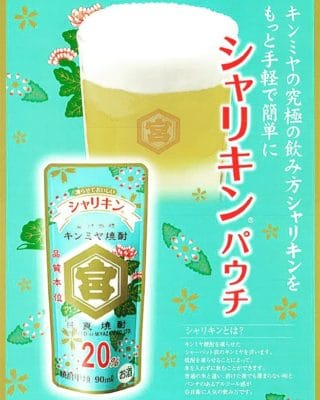 How to Make Hoppy?

Traditionally prepared by pouring shochu liquor into a cold mug, followed by the Hoppy. At an izakaya, the sochu is called “naka” and the Hoppy is called “soto,” and each can be ordered separately. Methods of preparation vary based on personal preference, but all produce a cold, refreshing drink. The use of ice in these drinks is often looked down upon, and in many cases, the shochu is frozen, and used in lieu of ice to avoid watering down the drink.

Hoppy is also less filling than beer, and serves as a good alternative to people worried about their health and weight. It contains fewer calories and carbohydrates than beer, is less carbonated, and contains no purines, which are thought to trigger gout.

Today, Hoppy can still be found in many bars, and is often paired with grilled meat or seafood. It can also be purchased at many Kanto supermarkets for those who want to perfect their Hoppy method at home. 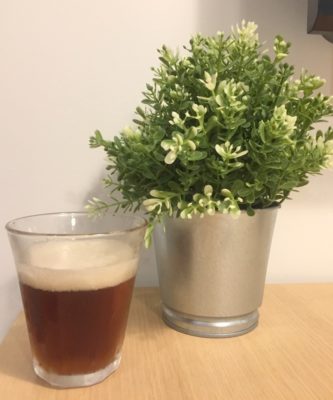 In recent years Kinmiya in small 90ml sachets can be purchased. These little bags of fun should be frozen and mixed with a carbonated mixer of choice- Hoppy, Ginger Ale- anything goes.

Called “Sharikin” a typical bag costs in the vicinity of 100 yen but can take up to 24 hours or more to freeze so make sure you prepare well in advance! 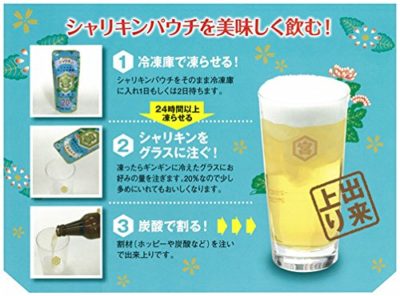 The Japanese use onomatopoeia in abundance and “shari-shari” represents the icy-crunchy sound of a frozen bag of shochu- so explaining the “shari” part. “Kin” on the other hand is the first part of the distillery company’s name- Kin-Miya. And so we are left with “Sharikin”.

After learning about Hoppy, I knew it was something I had to set out and try myself! I visited a local liquor store and was able to find Hoppy quite easily. Unfortunately, I wasn’t able to find a small “sharikin” bag of shochu, but made do with a small glass bottle from the same company. I chilled both bottles, and finally, it was time for a taste test. I followed the recipe, pouring some “naka” into the bottom of my glass, followed by the “soto” and was surprised at how well it foamed up. The first word that came to mind about the taste was refreshing. The mild taste, reminiscent of beer, was one that I wouldn’t mind drinking again and again, and I can understand how Hoppy has managed to stick around in Japanese drinking culture. For my next taste test, I want to take a go at yellow Hoppy.

This blog post was written by Mobal intern Lindsay Hofen while on internship in our Tokyo office. As far as we know we didn’t breach any Labour Laws in giving Lindsay the Hoppy Challenge- if we did- she certainly didn’t mind! 😉

« Krizevac: The Charity That Aspires to Transform the Less Fortunate

Seibo: Aiming to Feed Hungry Children Around the World »