With just over 300 days to go to the 9th Rugby World Cup in Japan the excitement is rising. This weekend’s Bledisloe Cup Final attracted a record crowd of 46,143 for a test match in Japan. On the pitch? A clean sweep for New Zealand who did little to puncture their air of invincibility.

The game was played at the International Stadium Yokohama (aka “Nissan Stadium”) with a capacity for 72,000.  The pitch cut up badly and come the World Cup we hope for even better numbers. Overall- plenty of room for improvement.

So, an on-pitch success and a good start for Japan’s rugby organisers. But let’s take a look at what was happening off the pitch.  After all the same venue will host fans from New Zealand, South Africa, Ireland & Scotland in the opening weekend alone. Curious as to how things are progressing? 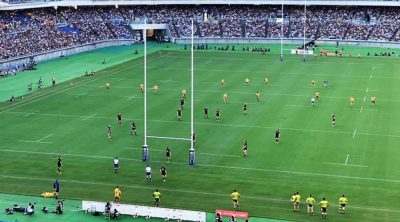 Highballs are in Fashion

Inside the stadium the drinks menu was a straight shoot-out between Suntory Malts Beer for 600 yen – or a Highball for 500 yen. Highballs (or simply whiskey with soda) are big in Japan. Drank as replacements for beer at match venues they go well with bar-snack food & can be drank in copious amounts without breaking the bank. Just don’t repeat the same trick at a hotel bar where highballs can be an elaborate cocktail with a tasty price tag.

In a previous article we already mentioned the need to learn chopsticks. The All-Black & Wallabies fans who made the trip to Japan this year are now favourites in the Foreigner Fast-Noodle Eating betting stakes. These special edition stick sets were rationed on match day for some bizarre reason! 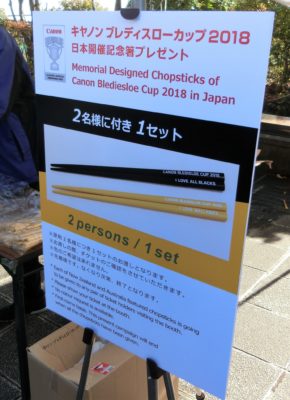 Where are the bars?

In Japan you can legally drink on the streets. The below image is of a match-day food vendor selling chicken, chips & frankfurters with an accompanying cooler box filled with cans of beer & “chu-hai” (flavoured Japanese white liquour & soda).  These match-day fans may have found the surroundings a bit odd but they did manage to find a bar! Doesn’t quite look like they’ve figured out how to order the food. 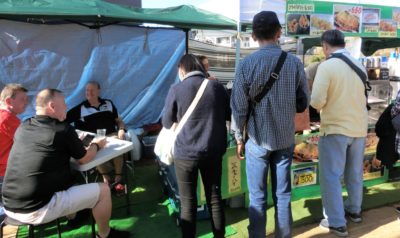 With Heineken signed up as a sponsor for the Rugby World Cup we suspect that come next year the signature green bottle and red star will be easier to find. This effort by Heineken located right outside the stadium was surely not their best effort? 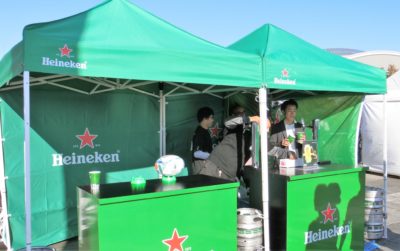 Overall the Bledisloe Cup Final was a useful rehearsal for RWC 2019.  With more locals than visitors the various food & drink stands had the feel of a local festival. The 9th Rugby World Cup looks likely to be different- just like this Gachapon offering a Japanese rugby jersey for your smartphone! 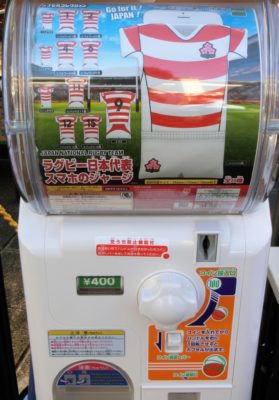